Here's my strategy on how I play Hashashin.

1) Strategy on How to play Hashashin Effectively with other classes

Hashashin is an assassin class with mid-range skills that can break through in the midst of chaotic field.

As a Hashashin you need to go IN and OUT immediately in teamfights while still dealing high damage and huge impact.

He is not like Berserkers or Destroyers that stays upfront in fights.

He is one of the best class to prioritize on killing enemy backlines.

For branches try to max out Aal and Ahib since only Unforgiven is a Labreve branch and does not have SA.

2) Tips on how to play Hashashin in Arena, GvG,Ramoness and other Mass PVP

In Arena, prioritize this combo :

If the enemy gets pulled instead of knockdowned from Eye of the Storm you can deal additional damage with Geo-Pulse.

You can also use Breath of Aal to disturb the enemy and Sand Saber for a mid-long range skill that knockback the enemies with Sandstorm Slash as a follow-up skill then do your combo.

This is the skillset for Arena (lvl 65):

At lvl 70, you can replace your Whirlwind Slash into Infusion for the buff.

For Ramoness,GvG,Outlaw Zone and other mass PVP:

After Breath of Aal your sandstorm slash will be off-cooldown and Eye of the Storm should have 2 charges ready.

Use these 5 Super-Armor (SA) skills in mass PVP so you won't get CC-ed by the enemies. Mass PVP is really fast and dynamic,

so you won't be able to use your Geo-Pulse and Unforgiven between your combos because they don't have SA.

Here's the skillset for Mass PVP: 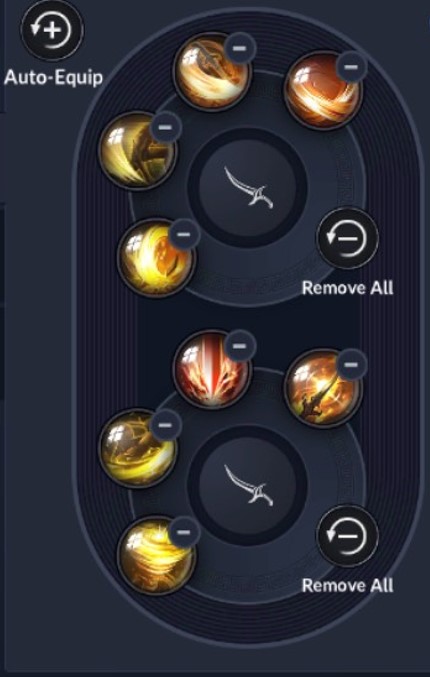 Moreover, since we don't have Mirage yet, we can use the four charges of Dodge to close the gap between us and the enemy. Upon clicking Dodge, Hashashin will have a "bow-ing" movement which actually has an invincibility for around 0.5 secs that you can be invincible during the time. Try to use it effectively in Arena also in Mass PVP.

For Arena I have a link down below that may help you to understand better.

3) Explaining on how does "20% of PvP Damage as follow-up" work in Hashashin Three Major Skills (Eye Of The Storm,Sand Sabre,Solar Strike)

Hashashin is the only class with extra damage on PvP , 20% of PvP damage as follow-up damage in three of his skills. This skill as I will mention as "Time-Bomb" effect later works as 20% of your initial skill damage based on hits. For example, your Eye of The Storm has 5 hits with the total of 3k damage (5x600 damage per hits). In the next 3 seconds while the enemy bleeds from your Eye of the Storm (60 HP at lvl 1 for 3 secs) the enemy will also get a sudden output damage from your "Time-Bomb" effect after 2 seconds for 5 hits with a total damage of 20% of your Eye of the Storm initial damage. This is absolutely INSANE high damage debuff, highest tick debuff I've ever seen. Below is the link which my guildies from FENRIR that has tested out. Shoutout to Mülberry and Clizame!

That's the end of my strategy sharing as a Hashashin user and fan. Best regards and good luck for all my fellow Hashashins!